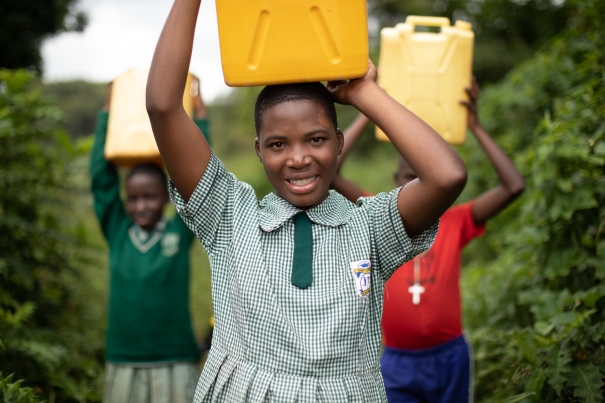 Blood:Water is bridging the gap between water, sanitation and hygiene projects and clinical support services in HIV/AIDS affected communities in Uganda, Rwanda, Kenya, Malawi and Ethiopia.

In this World Water Day we want to highlight the work of Blood:Water. We spoke with Founder Dan Haseltine on how their work is increasing the well-being, life and social development opportunities in several communities in East Africa.

About 20.6 million people in Eastern and Southern Africa are currently living with HIV, 13.8 million of them are accessing treatments,  according to 2018 UNAIDS statistics.

In rural communities, stigmas and prejudices against those infected is still ever present.

When Musician and Founder of Blood:Water Dan Haseltine travelled to the continent with his band for the first time he saw how people were afraid of the infection, how people were thinking that it was “God’s wrath” and punishment for their behavior and how families were rejecting those testing positive.

“We recognized there were just a million of excuses why someone wanted to stay away from helping someone with HIV,” Haseltine said.

Shame is tied to blood and raising awareness on this taboo topic was going to be a challenge unless connected to something more vital to people like a natural resource, a topic of conversation that made people less afraid to engage in such as: access to water.

“We spent time in Africa just learning from people, throughout these villages you realize that people that are wrestling with this disease that destroys their immune system and at the same time they don’t have access to clean water. So they may have access to the medicines, intra retroviral medications but they have to take it from water that is contaminated, water from rivers, lakes, streams filled with all kinds of bacteria. We found that most of people dying because of AIDS were dying because of the diseases they were contracted through the water they had to drink,” he explained.

Blood:Water began in 2004 establishing partnerships with grassroots organizations to help equip them

Since 2004, Blood:Water has partnered with grassroots and civil society organization to provide them technical, financial, and organizational supports in water, sanitation and hygiene programs (commonly known as WASH) to help address HIV/AIDS crises.

The organization believes that, in order to have a sustainable and long-lasting impact, solutions must come from engaging with local partners and people.

“We help organizations feel like they are supported and we apply further grant money and resources, support the water projects that they are doing and support the organization itself”, Haseltine said.

In a span of over 15 years, Blood:Water and its partners have helped positively improve the lives of up to 1 million people, particularly measured by the human success stories of individuals, families and villages that have prospered due to clean water access, better hygiene trainings and menstruation kits.

There is also an improved perception on the value of everyone’s life and that clean blood is still as important as having clean water.

“Affirmed dignity, that is something we have left behind and that’s what’s at the core of any strong development project”, Haseltine added.

You can learn more about Blood:Water here: http://www.bloodwater.org/